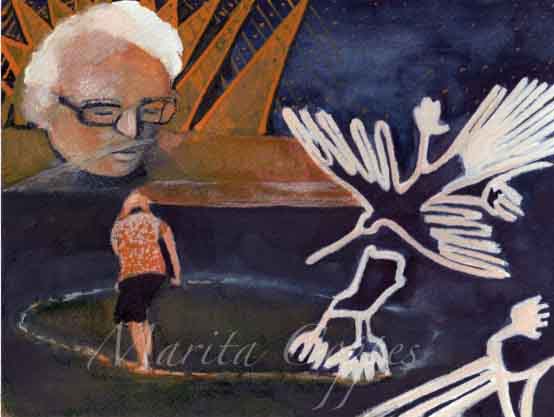 ‘To make the nascalines more accessible for viewing I cleaned them with a broom, one broom after another throughout the years.’

About Maria Reiche
Maria Reiche (1903–1998) was a German mathematician, archaeologist, and technical translator who carried out research into the Nazca Lines in Peru, beginning in 1940, and had success in gaining recognition and preservation of the property. She helped educate people about the resource and gain government recognition and preservation. In 1995 the Nazca Lines were declared a UNESCO World Heritage Site.

Maria Reiche was born May 15, 1903, in Dresden. She studied mathematics, astronomy, geography and foreign languages at the Dresden Technical University. In 1932, she began work as a nanny and teacher for the children of a German consul in Cuzco, Peru. In 1934, she lost one of her fingers to gangrene. That same year, she became a teacher in Lima and made scientific translations, as she spoke five languages. When World War II broke out, German citizens were detained in Peru.

In 1940, Reiche became an assistant to the American Paul Kosok, an historian from Long Island University in Brooklyn, New York. Making field studies from 1939–1941 and 1948–49, he is credited as the first Westerner of European descent to seriously investigate the Nazca Lines. He originally studied them in connection with field work on ancient irrigation systems, but quickly concluded they had another purpose.

He noticed lines that converged at the point of the winter solstice in the Southern Hemisphere in June 1941. Together he and Reiche began to map and assess the lines for their relation to astronomical events. Later Reiche found lines converging at the summer solstice. Around 1946, Reiche began to map the figures represented by the Nazca Lines and found 18 different kinds of animals and birds. After Kosok left in 1948, she continued the work and mapped the area. She used her background as a mathematician to analyze how the Nazca may have created such huge-scale figures and found them to have a mathematical precision that was highly sophisticated. Reiche theorized that the builders of the lines used them as a sun calendar and an observatory for astronomical cycles.

Because the lines can be best seen from above, she persuaded the Peruvian Air Force to help her make aerial photographic surveys. She worked alone from her home in Nazca. Reiche published her theories in the book The Mystery on the Desert (1949, reprint 1968), which had a mixed response from scholars. Eventually scholars concluded that the lines were not chiefly for astronomical purposes, but Reiche’s and Kosok’s work had brought scholarly attention to the great resource. It is widely believed that they were used as part of worship and religious ceremonies related to the calling of water from the gods.

Reiche used the profits from the book to campaign for preservation of the Nazca desert and to hire guards for the property and assistants for her work. Wanting to preserve the Nazca Lines from encroaching traffic after one figure was cut through by the Pan American Highway government development, Reiche spent considerable money in the effort to lobby and educate officials and the public about the lines. After paying for private security, she convinced the government to restrict public access to the area. She sponsored construction of a tower near the highway so that visitors could have an overview of the lines to appreciate them without damaging them.

In 1977, Reiche became a founding member of South American Explorers, a nonprofit travel, scientific and educational organization. She was on the organization’s advisory board and was interviewed for the South American Explorer on the lines’ significance and importance. Reiche’s health deteriorated over the years as she aged. She used a wheelchair, suffered from skin ailments, and lost her sight. In her later years, she also suffered from Parkinson’s disease. Maria Reiche died of ovarian cancer on June 8, 1998, in an air force hospital in Lima. Reiche was buried near Nazca with official honors.

More about this source Wikipedia